Some changes are planned for Düsseldorf's main station.

The BDA Düsseldorf takes a stand.

Planned construction projects:
Düsseldorf's main station is undergoing a transformation. The plans include a 115-meter-high office tower by Deutsche Bahn(1), which is to be built on the northern edge of the square after the demolition of the station annex (former hall building). In the course of this change, DB plans to raise and redesign the entrance building (2). On the six, partly open levels, there will be lounges for passengers as well as space for the offices of the federal police and a hotel. The station forecourt is also to be modified in the course of these changes (3). Opposite the main station, a new cultural center, KAP1, will be built in the former post office building (4). Directly on Konrad-Adenauer-Platz, three hotels and a pedestrian walkway to Mintropplatz are currently under construction (5). On the back side of the main station on Erkrather Straße, the urban quarter Grand Central is planned (6).

1. DB office tower:
The planned DB office tower was born out of the context of demolishing parts of the Immermannhof and creating a visual extension of the street profile of Immermannstraße. However, the demolition of the Immermannhof was rejected, the intended visual axis in the Immermannstraße towards the city center is consequently eliminated and the new tower construction would thus lose its urban planning sense. The BDA proposes to bring the tower into a horizontal position in order to simultaneously create a connection between Konrad-Adenauer-Platz and Bertha-von-Suttner-Platz. Thus, the planned DB tower would interfere less with the cityscape and create a connection of Konrad-Adenauer-Platz with Bertha-von-Suttner-Platz.

2. Reconstruction of the main station concourse:
The BDA is very critical of the plans to top up the concourse. In addition to the concern that the distinctive clock tower would become stunted, the BDA also notes that the planned harmonious transition to the three new hotels being built, the Hansahaus and the square edge of Konrad-Adenauer-Platz would be distorted. The addition of a new floor to the reception hall would create a major irreparable urban planning error. The BDA urgently recommends a revision of this planning in view of the new hotel building currently under construction.

3. Station forecourt:
The re-planning of the station forecourt with regard to attractiveness and accessibility envisages that sycamore trees would have to be felled due to the rerouting of the tram routes. The BDA advises an analysis by the environment and forestry office as to how healthy these trees are and whether it is advisable to cut them down or not.

4 KAP1
The conversion of the former post office building into the new cultural center space KAP1 will locate the central library, the FFT - Forum Freies Theater and the theater museum directly at Konrad-Adenauer-Platz.

5. Three hotels:
In the planning of the three hotels, extremely great importance was attached to the insertion of a connecting piece that mediates the heights between the existing station building and the new hotel building. Furthermore, care was taken to ensure that the proportions of the new building would harmoniously round out the transition. This "connecting piece" would completely lose its reason for existence with the new plans for an addition to the main station building, degenerate into an urban gap and be interpreted in the future as a design flaw.

6. Grand Central:
The new Grand Central urban district is planned on the site of the former postal distribution center. In addition to housing, areas for local shopping and daycare centers are also planned. More than 1,000 new apartments for rent and ownership are to be built in the quarter. A supermarket is planned to provide local services for future residents. Planning is currently at a standstill, and a start date for the construction project is not known yet.

Conclusion:
In summary, it is important to include the entire surrounding urban space in the future planning of Düsseldorf's main station area. These numerous renovations will create synergy effects with great impact on the entire surrounding urban space. The comprehensive redevelopment of the entire area holds many opportunities. The BDA welcomes these processes of change. But they also note that the current planning is not substantial enough. It is noticeable in the entire planning that only the front side of the main station is considered, the back side with the Bertha-von-Suttner-Platz, however, is completely disregarded. The BDA advises that the winners must revise the design of the new DB tower and the station forecourt, also with regard to the other new construction projects at the Düsseldorf main station, due to the changed planning parameters, or a competition must be held that takes the above-mentioned aspects into account!

Source: D-Magazine, March 2021
Click here for the article in D-Magazin 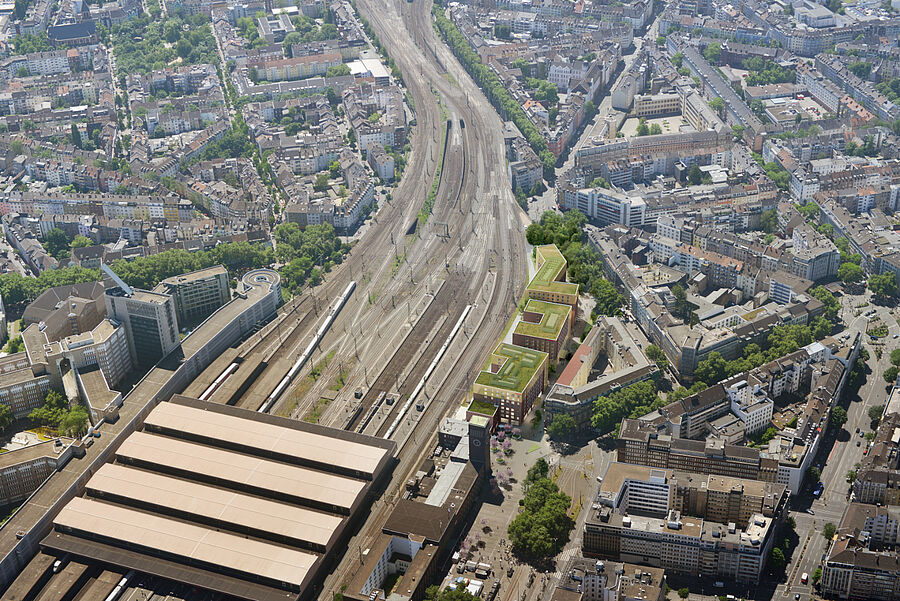