In summer, the climate in the city is significantly warmer and drier than in the surrounding countryside. Urban living space is characterized by materials such as asphalt, concrete, stone and steel, which heat up, store heat and slowly release it into the atmosphere. Around 44 percent of settlement and traffic areas in Germany are currently sealed (source: German Federal Environment Agency). Human intervention in the natural environment has now assumed such proportions that it has the character of its own geological age: the Anthropocene. Today, large parts of our planet are already covered with Anthropocene structures. Natural habitats are becoming increasingly urbanized by humans. Dense development and closely meshed traffic routes restrict the exchange of fresh air. The temperature difference in the city compared to the surrounding countryside can be up to ten degrees Celsius (source: NABU).

Greenery on buildings has a positive influence on these factors. The interaction between architecture and greening follows a long tradition that goes back to antiquity. One example is the hanging gardens of Babylon, one of the seven wonders of the ancient world. Today, in the face of climate change and the need for sustainability, a new "hortitecture" continues this tradition and redefines the relationship between architecture and planting. In this context, the term hortitecture describes the synergies between architecture and plant material (the term was coined by architect Almut Grüntuch-Ernst). Hortitecture explores architectural strategies that activate the potential of plant material in the design process. Green roofs and facades can counteract the effects of sealing and improve water balance, air quality, and climate. Plants become an integral part of a building in this process. Greenery on and around buildings increases air quality, filters dust, pollutants, noise, odors, generates oxygen, protects against heat and cold, and has a positive physical and mental impact on people. In addition, a green roof and facade, just like all other plants, binds carbon dioxide and produces oxygen in the process. Another positive effect of a green roof is the reduction of dust turbulence by reducing the vertical air movement of the heated roof surfaces. In addition, planted roofs and facades serve to shade buildings. Greenery provides habitat for small animals and plants to promote biodiversity. During heavy rain events, water retention is supported and rainwater is stored to slowly evaporate and provide cooling sort. Heat effects are minimized and the risk of flooding in the sense of a sponge city is reduced. Likewise, the buildings receive an aesthetic enhancement through an extensive formative greening and the life span of the roof cladding is extended.

A distinction can be made between extensive, intensive and vertical green roofs.

Intensive green roofs have an increased establishment height and are suitable for flat to slightly sloped roofs. The deeper substrate layer allows taller perennial shrubs and woody plants to be planted. This complex greening has a higher maintenance requirement and a higher demand on the statics.

Vertical greening as a design element of the façade uses different systems to allow plants to grow on a vertically fixed substrate. Vertical greening can be free-standing or attached to a wall.

The initiative "Mehr Grün am Haus - Spür das bessere Klima" (More green at home - feel the better climate) of the NRW consumer center aims to motivate consumers to green houses with a broad program of events. Click here for the initiative.

The symbiosis of architecture and greenery has a long tradition. This tradition must be continued and intelligently developed. In urban development, approaches should be pursued above all that understand the built space as a synergetically functioning ecosystem for people and nature. For a resilient, sustainable built environment! 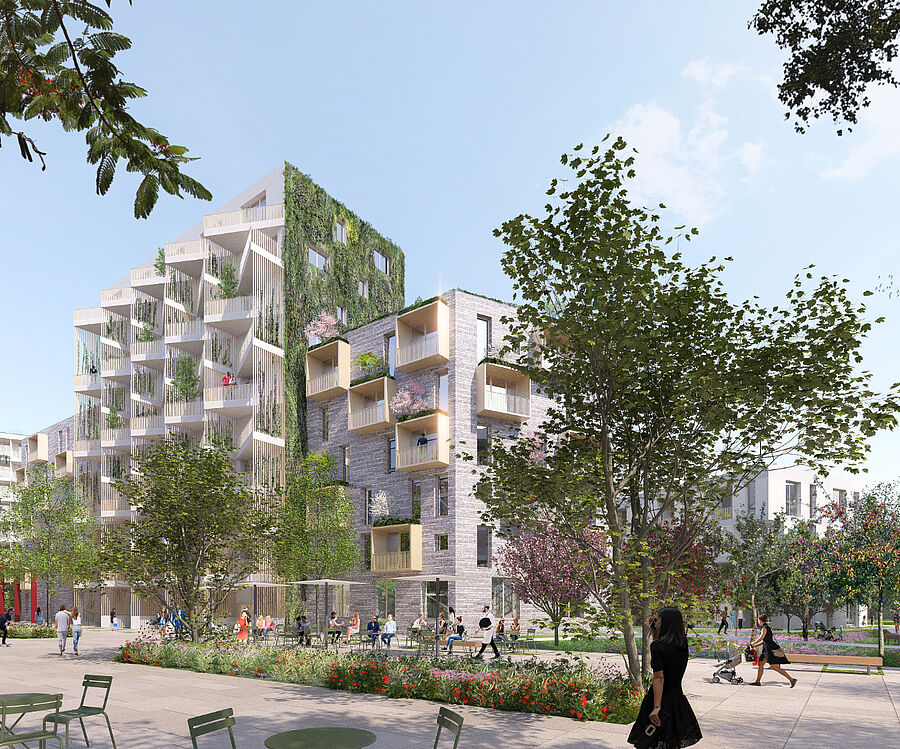