Real estate developer GBI implements the concept of architectural firm greeen! architects, which won an urban development competition / Hotel chains Premier Inn, Hampton by Hilton and Adina Apartments complement each other in addressing different groups of guests / With a total of 717 rooms, one of the largest hotel project developments in Germany / Steak restaurant Block House and parking garage of operator APCOA as further important parts of the quarter / DWS acquired building for open-end real estate fund.

Düsseldorf/Berlin, March 17, 2022 - The new real estate quarter on Harkortstrasse in the center of Düsseldorf has been completed. Three accommodation facilities under the Adina Apartment Hotel, Hampton by Hilton and Premier Inn brands have been built on the 17,000-square-meter site, which is located directly next to the main train station and was used for decades as a rail car loading station. The real estate project, with a floor area of 32,700 square meters, is GBI's largest project development to date and one of the largest hotel projects in Germany, with a total of 717 completed rooms. In addition, there is a Block House steak restaurant that will welcome up to 122 guests on 525 square meters inside and on an outdoor terrace, as well as an underground parking garage with 238 spaces operated by APCOA PARKING and used by the hotels and the public.

"The fact that a construction project of this size could be completed within the deadline set for the start of construction in 2019, despite the Corona pandemic and widespread staff and material shortages, is a special achievement by our construction team," emphasizes Dagmar Specht, the GBI Holding AG board member responsible for planning and construction management. As a result, Block House and the parking garage operator APCOA were already able to commence operations at the end of last year. Then followed on January 10, 2022, the Hampton by Hilton, operated by Foremost Hospitality, with 219 rooms, and on February 18, the Premier Inn with 297 rooms. The final hotel was the Adina Apartment Hotel with 201 units in early March. Ownership of the hotel trio was transferred from project developer GBI to DWS's grundbesitz europa open-ended mutual property fund in February 2022.

Location quality around the main train station significantly improved
"Creating an inviting image for the city in one of Düsseldorf's most prominent locations was our goal from the outset. The result is now really something to be proud of," sums up Reiner Nittka, spokesman for the management board of project developer GBI. Since the start of planning in 2016, GBI had conducted an intensive dialog with local politicians, the city administration and neighbors. "Thus, residents were also involved in the redesign. The continuous passage from the main station to Mintropplatz, as well as its friendly and bright design, was an important element for all those involved," says Nittka: "The three internationally successful hotel brands complement each other well and provide an offer at the central square that suits the capital of the most populous German state, which is a magnet both economically and culturally.

The Düsseldorf architectural firm greeen! architects, which won an urban planning competition for the redesign in 2016, was responsible for the planning: "Our aim was to upgrade the central location and integrate all three squares around the main station - Mintropplatz, Harkortplatz, Konrad-Adenauer-Platz - into urban life," says Mario Reale, managing director and project manager, explaining the aim of his concept: "We succeeded. Now you can walk around Düsseldorf's new center without any problems. The city and its citizens have been given a new high-quality neighborhood."

For Cornelia Zuschke, head of the department for planning, construction, housing and real estate of the state capital Düsseldorf, the project development in Harkortstrasse results in a successful urban development picture: "The previously fallow potential of the area is being activated and staged with good architecture. It is already apparent that this will have a positive effect on the entire surrounding area. It creates a pull effect for good ideas and interesting settlements." The urban design has significantly increased the quality of the area around the station.

To underline the neighborhood concept of the project development, there is a continuous facade with a surrounding brass-colored band for all three hotels. In addition, the generously glazed first floor enlivens the newly created passage and, with the outdoor gastronomy also possible at the hotels, a fully-fledged urban space is created. The hotel trio with its direct connection to Konrad-Adenauer-Platz thus represents the first building block for the redesign of the entire station forecourt. This is being carried out together with Deutsche Bahn Station & Service AG. The "Masterplan Areal Hauptbahnhof", in the development of which the citizens were also involved, provides the design framework. Architect Reale: "Friedrichstadt and Bilk will be connected in this way with the upgraded station forecourt."

Hotel operators appreciate central location of the site
Although the three hotel chains operate internationally, the location in the center of NRW's state capital is something special for them. "Normally, it is very rare to have the opportunity to secure such an excellent location in A-cities in Germany. That's why we were very happy to fit into the mixed-use concept developed by GBI for the site at the train station," emphasizes Dr. Michael Hartung, head of investment and management at Premier Inn Germany: "Düsseldorf is a high-priority location for us as the capital of North Rhine-Westphalia, and even more so in such a central location!" 297 rooms of the British chain can now be booked.

Düsseldorf is also a strategically important market for the Adina brand, which originated in Australia, as it expands in Europe. "For our apartment hotel concept, we need central locations in top cities where generous space planning is possible. At Düsseldorf Central Station, guests can now book 201 of our fully equipped studios and apartments between 28 and 60 square meters for short- or long-term stays. We were able to realize our concept optimally here," says Matthias Niemeyer, Director of Development Europe at Adina Hotels.

Foremost Hospitality Management GmbH, which acts as a franchisee of Hilton in Germany, had searched for a long time for a suitable location in the NRW state capital before deciding on the project at the main train station. "For us, the 219-room Hampton by Hilton Düsseldorf City Centre is an important addition to our portfolio," says Timo Kläner, managing director at Foremost: "The hotel meets the needs of our guests at this very central location and is an excellent fit with the growth strategy of our brand partner Hilton."

The operators are optimistic that occupancy will develop positively. "This will become apparent very soon, when most of the Corona restrictions will no longer apply," Inge Van Ooteghem, Chief Operating Officer of Premier Inn Germany, is convinced: "Then we expect a significant increase in bookings due to the central and convenient location. For many guests of such a cultural and business metropolis, accessibility and city center connections are an important argument when choosing where to stay."

Redesign also includes a daycare center
And not only travelers, but also the local infrastructure was thought of during the project development. That's why the daycare center "Die sieben Zwerge e.V." has been retained - even though it is partially located on the GBI site. It was also possible to resolve construction issues with the neighboring tax office in good agreement.

DWS had already acquired the properties before the start of construction as a project development for the grundbesitz europa open-ended mutual property fund. The purchase price amounts to around 157 million euros. "With its central location directly at the main train station in one of Germany's top cities, the hotel ensemble consisting of three buildings with long-term leases and the well-complementing operator concepts convinced us from the very beginning," explains Anke Weinreich, fund manager grundbesitz europa at DWS: "The acquisition serves the sectoral diversification of our real estate portfolio comprising almost 100 properties with previously only three hotels." For Simon Behr, Managing Director of GBI Capital, this transaction of the building complex in the center of Düsseldorf was also something very special. "The project in Düsseldorf is not only one of the largest hotel developments in recent years. The transfer of ownership was also challenging due to the combination of different uses and operators," says Behr.

For GBI, this is already the second project development of a hotel trio in a German metropolis. Three hotels were completed in Frankfurt's Europaviertel in 2016. The Premier Inn and the Hampton by Hilton were also included at that time. An apartment offering was also added there, with a Capri by Fraser. "With the right mix of lodging establishments, hotel projects like this can be successful," he said. With 717 rooms compared to Frankfurt's 512, this is now an even bigger development of a trio of hotels," explains GBI executive Dagmar Specht.

New culinary offering from Block House suits the Rhine metropolis
For Hamburg-based steakhouse chain Block House, the restaurant at the main train station is the second offering in Düsseldorf, alongside Block House in the Altstadt. "Düsseldorf is known for its open and friendly population and we are pleased that the Rhinelanders enjoy our culinary offer as well as the good atmosphere for conversations and meetings in both restaurants.  The new Block House in a central location at the Bahnhofsquartier fits in well with the flair of the Rhine metropolis and offers a cozy place to go for Düsseldorfers and visitors to the city," says Markus Gutendorff, CEO of Block House Restaurantbetriebe AG.

This is already the nineteenth managed parking space in Düsseldorf for APCOA, the underground car park at the main station. "Additional parking facilities were urgently needed at such an important hub, and not just for hotel guests," says Anja Müller, Director Operations at APCOA PARKING Deutschland GmbH: "You can already see that from the high parking demand in the first few weeks." With APCOA FLOW, customers there can use a digital service that makes parking easier and safer. The free app allows users to enter and exit the parking garage without a ticket or cash. 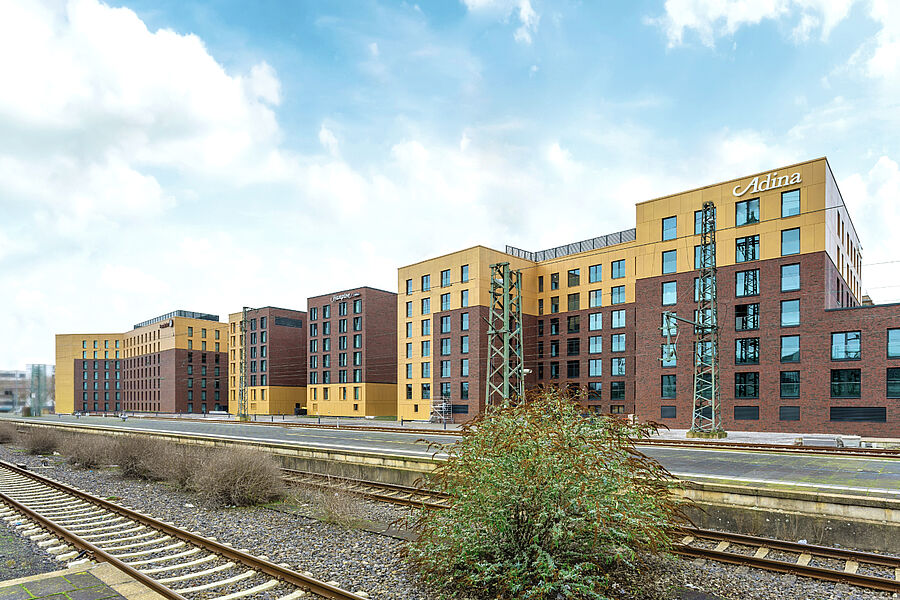 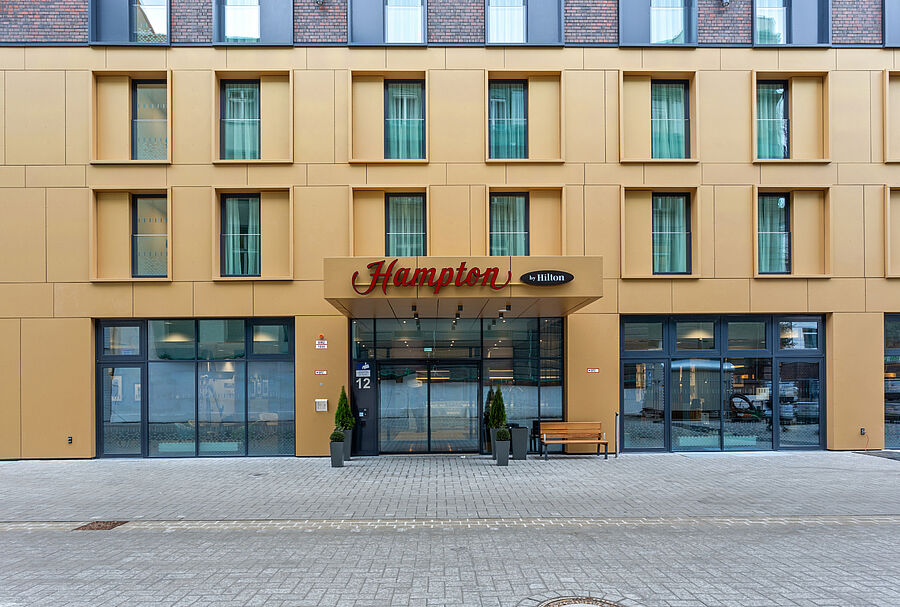 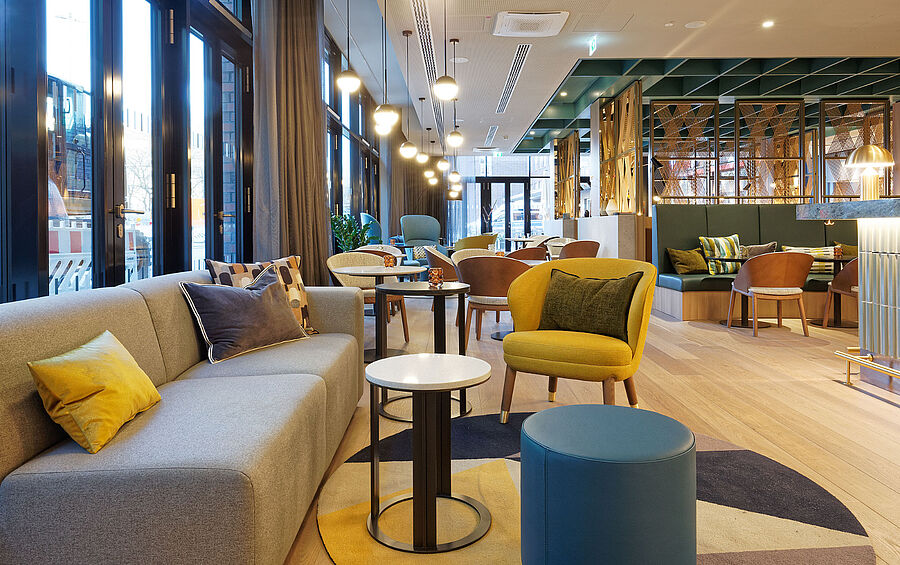 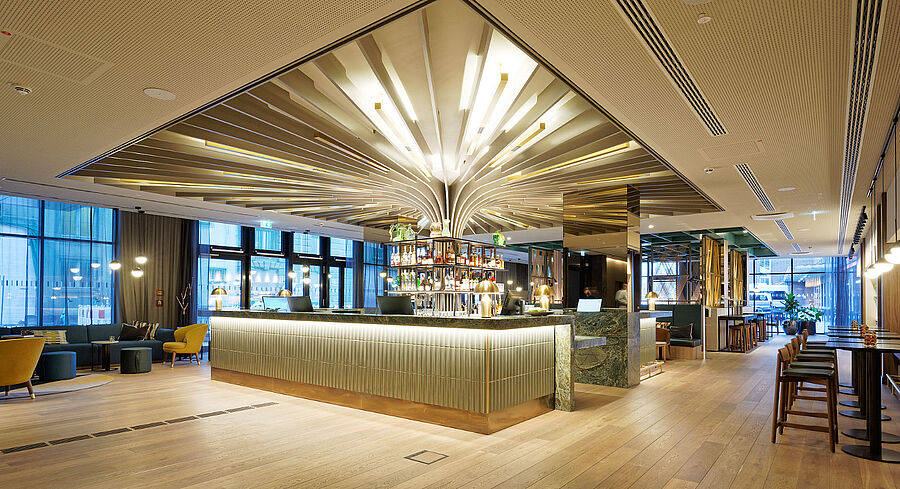 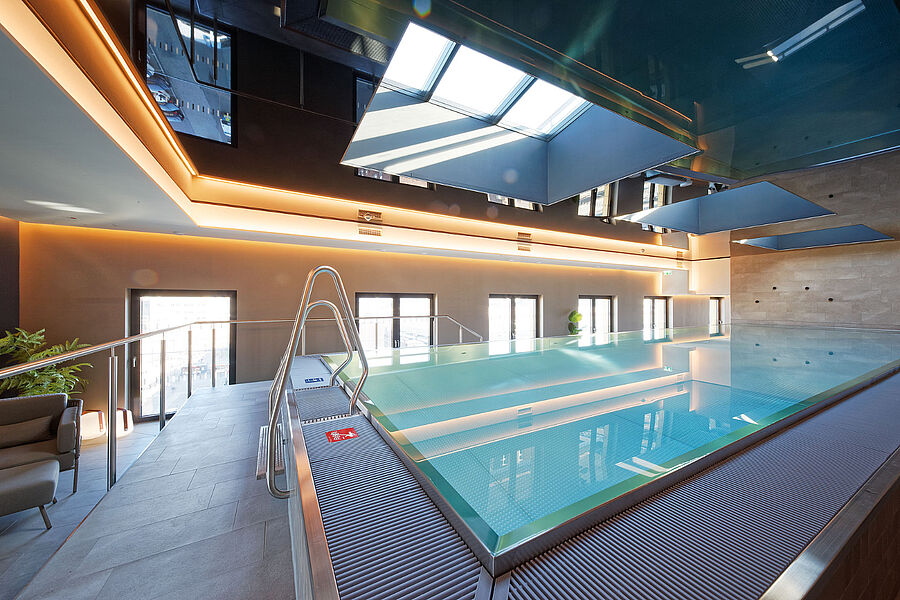 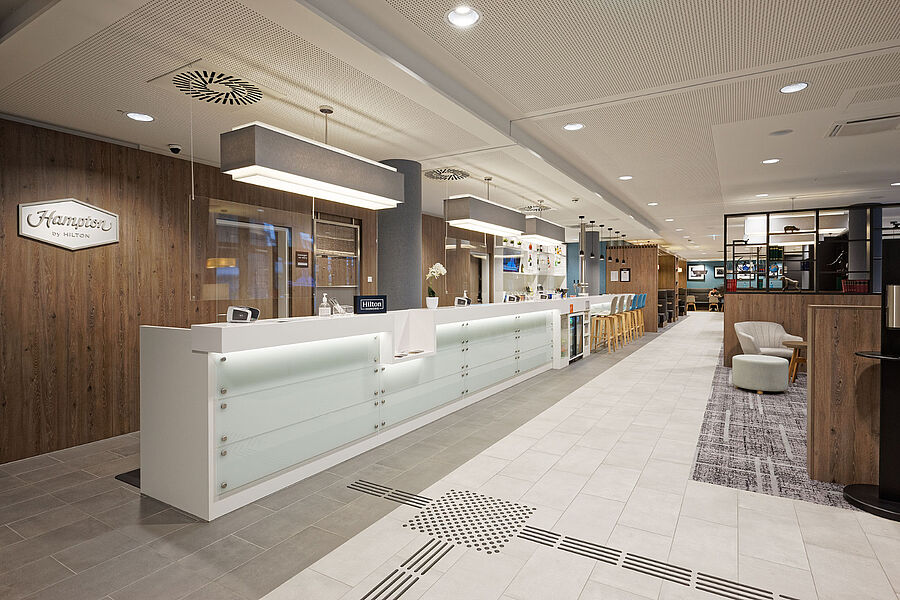 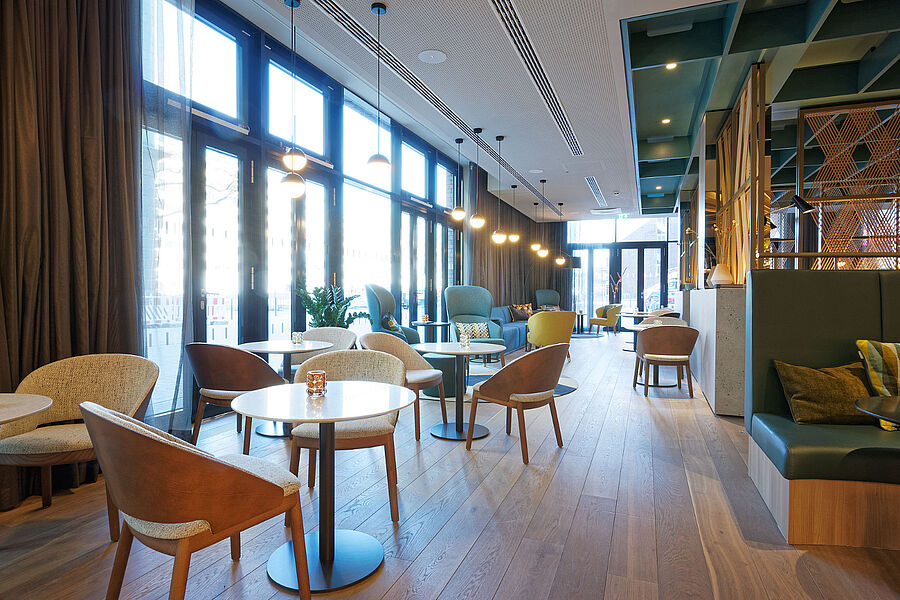